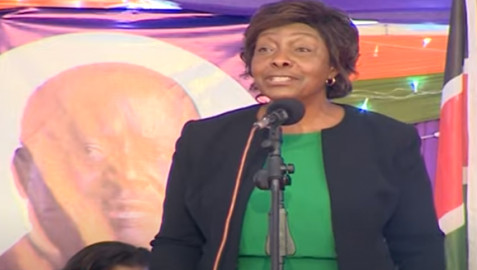 In a thinly-veiled attack at the DP, Ngilu blamed the Ruto for some of the failures of the current administration, accusing him of pulling President Uhuru Kenyatta behind in the quest to fulfil the Jubilee manifesto.

The Kitui Governor pointed out that while President Kenyatta was determined to achieve a good legacy, his efforts have been tarnished and undermined by some rogue government officials who are pushing their own agenda.

Ngilu also claimed that had that the DP had a track record of failure when it comes to leading government dockets.

“Let me say here ukiangalia all the ministries and I am speaking confidently and authoritatively just look at the Ministry’s that he led, Anzia na energy, nimeona leo Kenya Power imeenda under, Kenya Pipeline imeenda under, Ministry of Agriculture na Finance  meenda under,” the Kitui Governor said.

At the same time, Ngilu questioned the source of Ruto’s campaign funds and asked the Deputy President to reveal where he gets the funds from.

She however lauded President Kenyatta and Odinga for inking the Building Bridges Initiative famously known as the ‘handshake’ citing that had it not been for their willingness to cooperate,  the country would have been in a far worse state than it is now.

In her address, Ngilu also urged Kenyans to exercise caution when choosing leaders, emphasizing support for leaders who will bring development and unity to the country.

“As we wait for President Kenyatta's term to end, we must have a person who we have confidence in to lead this country. Azimio la umoja ni kuleta serikali ambayo wananchi wako mbele na viongozi wangoje kidogo na si tumbo kwanza,” she said.