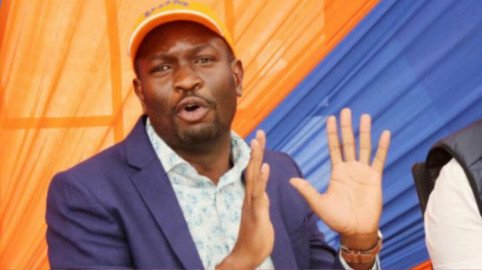 The Orange Democratic Movement (ODM) party has distanced itself from the mayhem at Deputy President William Ruto’s rally in Jacaranda Grounds, Embakasi East on Sunday.

ODM Secretary-General Edwin Sifuna, in a statement on Monday, dismissed claims by the United Democratic Alliance (UDA) that the chaos was orchestrated by ODM, terming them as a desperate attempt by DP Ruto’s camp to distract the public from the incitement allegations it is facing.

“ODM declines the invitation to be blamed for seeds of discord sown by the corruption lords who have panicked at the prospect of a Raila Presidency,” said Sifuna.

The party now wants the investigative authorities to probe the incident which saw stone-wielding youths disrupt the UDA rally.

“We welcome the call for the Police, DCI and all other investigative agencies to conduct a thorough probe into the events at Jacaranda,” stated Sifuna.

He added: “We have no doubt that the same conclusions as were drawn in Kondele, the fake assassination claims and fake abductions will be reached.”

UDA party chairman Johnson Muthama, through a statement on Monday, claimed that the stone-throwing mob was on ODM's payroll.

"A similar incident took place in Kitale where members of parliament allied to UDA were disrupted by the police from having a peaceful meeting," Muthama said.

According to UDA, ODM has demonstrated that it will use violence as part of its strategy to clinch the top seat in several separate incidents.

"This is not the first time these ugly scenes have occurred. On 5th September 2021, in Kieni  Nyeri County, the Deputy President’s motorcade was stoned.

While accusing Interior CS Fred Matiang’i of ​​’silence’ and ‘cheerleading such intolerant and unacceptable behavior’, the party demanded that the Interior Ministry and the National Police Service investigate the incident and prosecute those found responsible.

They further promised to write to the IG to know the progress of the investigations and the action that has been taken.