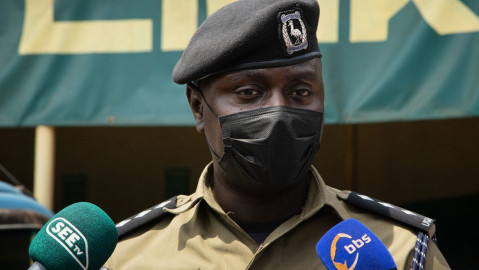 Police in Uganda are investigating two explosions in Kampala which are both blamed on the rebel Allied Democratic Forces, an affiliate of the Islamic State, and said arrests have been made.

A blast targeting a bus killed one person on Monday, and an explosion Saturday at a bar in the capital left one person dead and several others injured.

"So far, we've managed to arrest three collaborators who were receiving money from the ADF sources and distributing it to their recipients, to their operatives and agents in the country."

He said the suspects, identified as Abdulrahman Waibi, Sanyu Nakitende and Aisha Katushabe, distributed $114,000 (Ksh.12,671,100) in connection with the attacks.

Great Lakes Region security analyst Dismas Nkunda said it would not be surprising if the reports about the ADF are true, considering the group is based in the eastern part of the Democratic Republic of Congo.

The group has been operating in the DRC for the past 20 years after being pushed out of Uganda. Authorities say the group is expanding to other countries in the region

Nkunda says the bombings could show new aggression on the part of the ADF.

"It would be a new chapter in understanding how the conflict in Uganda is going to be if it's a terrorist institution that is bent on causing maximum harm."

The ADF, which opposes President Yoweri Museveni's government, has been affiliated with Islamic State since 2016 when Nkalubo pledged allegiance to the militant group.

On its Telegram page Monday, Islamic State claimed responsibility for the bombing at the bar, claiming members and spies of the Ugandan government were gathered there.

That evening, the bomb on the bus exploded as the vehicle headed to the Bushenyi district in western Uganda. One person was killed. The dead man was identified as Isaac Matovu, whom the police suspect was transporting the bomb.

No one has claimed responsibility for that attack.