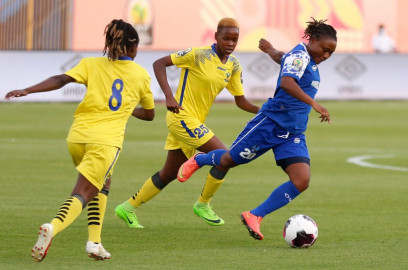 Vihiga Queens’ CAF Women’s Champions League campaign is over after they suffered a 4-0 defeat at the hands of Nigeria’s River Angels on Friday.

Vihiga had needed a positive result to stand a chance of reaching the semi-final but were overwhelmed by the Nigerians from the start at the 30 June Stadium in Cairo, Egypt.

Vivian Ikechukwu hit a brace and Koku Damilola and Gift Monday scored a goal apiece although their efforts were insufficient to haul River Angels into the last four.

A barren draw between Mamelodi Sundowns and ASFAR meant the two clubs sealed the two available tickets to the semis with former qualifying as group leaders.

River Angels took the game to Vihiga from the opening minute with Iyabo Kuku forcing Lillian Awuor to an early stop.

Queens conjured a chance of their own in the 37th minute through Terry Engesha who saw her shot narrowly miss the target after she had dribbled past three defenders.

Jentrix Shikangwa also failed to find the target three minutes to the break, shooting wide from Lillian Makokha’s cross with only goalkeeper Charlotte Adjei to beat.

It ended 0-0 after the opening 45 minutes but it all fell apart for the Kenyans as River Angels found a next gear after the restart.

to converter Lilian Mkaoha cross after she was left by Nigerian keeper Charlotte Adjei.

Makhoha conceded a penalty after handling the ball in the danger zone and Ikechukwu tucked it away coolly after sending Awuor the wrong direction.

Vihiga conceded another penalty after Koku who was brought down in the danger area and Ikechukwu stepped up again to double her side’s advantage.

Koku got River Angel’s third before substitute Monday sealed the rout late on.