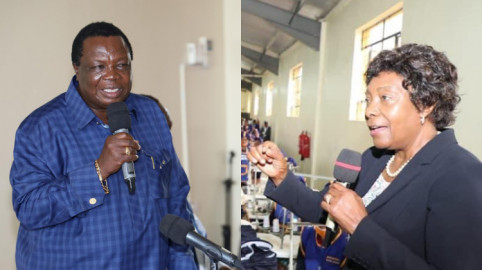 They also maintained that Ruto and Mudavadi’s newfound union was not a threat to Odinga’s August polls prospects.

Atwoli, through his Twitter account on Sunday after the duo’s announcement, termed Mudavadi’s alliance with the DP as an embarrassment to the Luhya community.

“Befriending Ruto is not the key to the Presidency. He has ashamed the Luhyas by allowing Ruto to fund his NDC,” wrote Atwoli.

DAP Kenya Party leader Wafula Wamunyinyi, at the same time, termed Mudavadi as an unethical leader while also noting that the Azimio brigade was ready to face them come August.

“A leader who admits being unpredictable and thinks that it is a virtue in leadership is completely misguided. Musalia and Wetangula have been hiding in plain sight as they campaign for William Ruto in Western and we shall treat them as our competitors going forward,” stated Wamunyinyi.

He also maintained that their allegiance to Raila Odinga still stands, saying: “Our gloves are now off, we will face them with bare knuckles. We also want to make it clear that for us, UDA is not an option.

On her part, Kitui Governor Charity Ngilu hailed Kalonzo Musyoka and Gideon Moi as wise for walking out of the Bomas of Kenya auditorium, accusing Mudavadi of hypocrisy.

“Kalonzo Musyoka is such a wise and mature man for what he did yesterday, because here is this cunning person whom they have been working together with but has kept secrets from the others, until they realized it at the last minute,” Ngilu told Musyi FM on Monday.

“He and Moi did very well walking out of the trap. What I saw yesterday was a YK '92 reunion and they were very happy because they are birds of feather,” added Ngilu.

Eldas Member of Parliament Adan Keynan, speaking to Citizen TV’s Day Break show on Monday described the union as long overdue, saying that it would instead work against Mudavadi.

“There is nothing unexpected that happened yesterday. In my opinion, my friend Mudavadi lost his national stature. I am so sure that the deputy president will come from Mt. Kenya so what will be the role of Mudavadi in that particular structure?” posed Keyan.

“He was a presidential candidate but what he did yesterday was shelve his ambitions. The event has handed over the entire Western region to Raila Odinga,” he added.

Other legislators who have expressed disapproval of the new-found unity include MPs Stephen Mule (Matungulu) and Patrick Makau (Mavoko), who termed Mudavadi a political traitor who cannot be trusted with the country's leadership.

"For many years I have said Mudavadi is not a serious chap. After promising Kenyans to expect a ‘political earthquake’, he only ended up joining the wheelbarrow team,” Makau said on Sunday.

“This is a betrayal of Kenyans. We are urging Kalonzo to soldier on and become OKA's presidential flag bearer.”

On his part, Mule criticized Mudavadi as a joker who has failed millions of Kenyans.

"Kenyans will never trust Mudavadi ever again. He has betrayed Kalonzo, Gideon and Wetangula. His action today marks the beginning of the end of his political career," said Mule.

The MPs further defended Kalonzo Musyoka and Gideon Moi's walkout, claiming Mudavadi had been Ruto's mole all along.