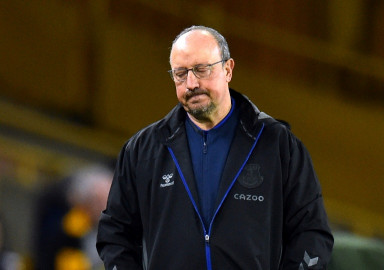 The Toffees appointed the former Liverpool manager, 61, as Carlo Ancelotti's successor in June.

Rafael Benitez says he did not realise the "magnitude of the task" at Everton following his sacking on Sunday after less than seven months in charge.

The Toffees appointed the former Liverpool manager, 61, as Carlo Ancelotti's successor in June.

Everton have won only one of their past 13 Premier League games and are 16th in the table, six points above the relegation places.

"We knew it wouldn't be easy," Benitez said following his departure.

"It was a big challenge, both emotionally and in terms of sport. My love for this city, for Merseyside and its people, made me accept this challenge, but it is only when you are inside that you realise the magnitude of the task.

"From the very first day, my staff and myself worked as we always do, with commitment and full dedication. We didn't only have to get results, but we also had to win over people's hearts.

"However, the financial situation and then the injuries that followed made things even harder."

Everton, who say an update on a permanent replacement will be made in due course, held an emergency board meeting on Saturday to discuss Benitez's future following Saturday's 2-1 defeat at Norwich, which was a ninth loss in the club's past 12 league games.

Everton's travelling contingent demanded Benitez "get out of our club", while a supporter invaded the pitch in an attempt to confront the Spaniard.

Benitez has been denied the services of several key players throughout the season, with key forwards Dominic Calvert-Lewin, Richarlison and defender Yerry Mina having been out with injuries.

The Toffees have brought in three players this month - Vitalii Mykolenko from Dynamo Kyiv, Nathan Patterson from Rangers, and winger Anwar El-Ghazi on loan from Aston Villa, with Lucas Digne making a permanent move in the other direction.

"I am convinced that we would have been better once the injured players were back and with the arrival of the new signings," added Benitez.

"The road to success isn't easy and, sadly, nowadays in football there is a search for immediate results and there is always less and less patience; unfortunately circumstances have determined the results and it won't be possible to continue this project.

"In any case, thank you to the board, to the staff, to the players, and to those fans who have supported us during this time."

Benitez, whose last job in the Premier League before Everton was at Newcastle United, leaves the Toffees with an overall win percentage of 31.8% - his lowest record in charge of an English club.

Another potential candidate is Belgium coach Roberto Martinez. He was the first Everton manager sacked by owner Farhad Moshiri in 2016 but BBC Sport understands he still has admirers among the club's hierarchy.