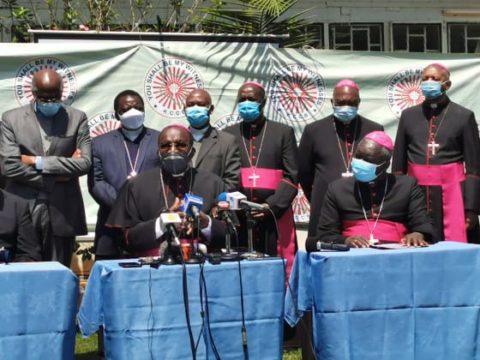 Catholic Bishops in Kenya have opposed calls for the removal of IEBC Chairman Wafula Chebukati and the three commissioners at the electoral body who oversaw the last General Elections.

Addressing the media on Wednesday, the 23 clergymen, under the Kenya Conference of Catholic Bishops, noted that the IEBC is now fully constituted following the appointment of four new commissioners and therefore focus should now be on preparations for the 2022 General Election.

According to the men of the cloth, any further attempts to reconstitute the electoral body at the moment would derail the upcoming elections.

“As it stands, the IEBC still does not have a substantive Chief Executive Officer less than a year to the next general elections. Similarly, there are already calls from a section of the political divide for replacement of the Chairman of IEBC, Mr. Wafula Chebukati and three of the old commissioners.
The ongoing exchanges on the push to remove the IEBC Chairman and three other commissioners is unhealthy and risks derailing the process of holding free and fair general elections in August 2022,” they said.

The bishops further insisted that upcoming elections should be held in August as scheduled, noting that any attempt to the change the date would heighten political tension in the country.

“We are aware that there has been talk of postponing the general elections. This is sending confusing signals and creating needless apprehension amongst the people and predictably, the political class,” said the bishops.

“We reiterate our position that the August 2022 general elections must proceed as scheduled. Postponing the elections will only heighten political tension, anxiety and unrest.”

At the same time, the Catholic Bishops have raised concern over the ongoing political intolerance in the country and are calling on leaders across the divide to tone down on political rhetoric.

“We urge the National Cohesion and Integration Commission to take action on all politicians who by their political pronouncements are spreading ethnic hatred and divisions,” said the bishops, adding “Time has come for us to introduce maturity and discipline in our politics.”

They further reiterated that all the legal reforms cited in the judgement of the Presidential petition filed in 2017 be instituted within the next three months in the interest of free and fair elections.

Meanwhile, the Catholic Bishops have called on President Uhuru Kenyatta and his deputy William Ruto to reconcile and work together for the sake of unity in the country.