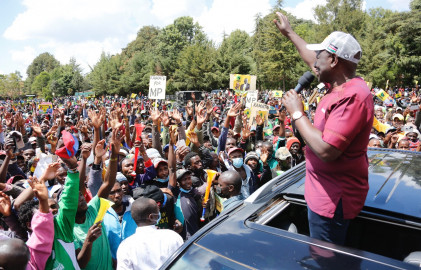 Deputy President Wiliam Ruto has slammed his political opponents, accusing them of attempting to discuss Kenyans' future in boardrooms and hotels.

The second-in-command who was accompanied by his allies on a tour of Nyahururu town on Saturday, asserted that Kenya needs a president who prioritizes job creation over protecting the wealth of the privileged.

“Those of you out of contempt who think you can decide for the people of Kenyan in hotels by interviewing the people you want to sponsor, we want to tell you that we are waiting for you hapa kwa ground,”  DP Ruto added, appearing to refer to the recent meeting between the OKA and the Mt. Kenya Foundation.

The Deputy President who was drumming up support for his 2022 presidential bid said that this time round, having helped President Uhuru clinch the top job in the past, he was keen on helping those on the bottom rungs of the economic ladder.

He also downplayed claims that the central region was warming to ODM leader Raila Odinga, who, despite not declaring an interest in the presidency, has been on countrywide tours, popularizing his "Azimio la Umoja" tag line.

DP Ruto referred to Raila as a visitor to the Central Region, and purported to welcome him to the vote-rich region where he claims to be a resident.

During the tour, DP Ruto donated Ksh.1.5 million to 500 small businesses in the region to boost them.

He also promised to allocate Ksh. 120 million per constituency every year should he be elected Kenya’s fifth president.

His allies, led by Kimani Ichungwa, claimed the government was planning to postpone the polls on the basis of a festering diplomatic conflict with Somalia