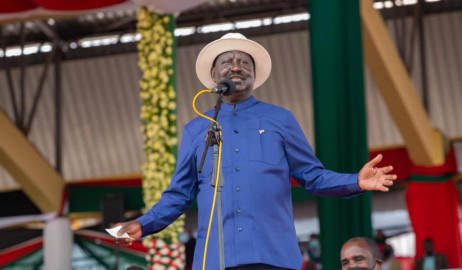 Independent Research Analyst Tom Wolf said at the moment the number of undecided voters remains high since Mr. Odinga -- who is one of the formidable candidates alongside Deputy President William Ruto – has not officially announced his candidature.

Political pundits believe that ODM leader Raila Odinga's anticipated announcement next month on whether he will be in the 2022 presidential race will significantly influence the decision of many voters.

Speaking on Citizen TV's News Night show on Tuesday, Independent Research Analyst Tom Wolf said at the moment the number of undecided voters remains high since Mr. Odinga -- who is one of the formidable candidates alongside Deputy President William Ruto – has not officially announced his candidature.

Wolf placed the number of undecided voters currently at between 20-25 per cent even as he acknowledged that several factors among them the ethnic arithmetic and running mate factor have a significant impact on voters’ choices.

The researcher explained that many voters make up their minds on their candidates of choice once the battle lines are drawn and it gets clear who the two horses on the race will be.

He went ahead to highlight previous trends, noting that a year before the 2007 elections, in December 2006, only 9 per cent of the voters had not made up their minds.

Explaining why at the time there was a low percentage of undecided voters, Wolf said: “After that referendum defeat of the so-called Wako Draft in November 2005, the battle lines had been drawn. It was either Mwai Kibaki getting a second term or Raila Odinga and the Pentagon. So that choice was very clear. We did not have many people not having made up their mind.”

By November 2007; just five to six weeks to the elections, Tom Wolf says from the opinion polls, only 1 per cent of the voters didn’t give a clear response on their preferred presidential candidate.

In December 2011, just about 14 months to the 2012 elections, Wolf pointed out that there 17 per cent of voters were undecided, pointing out that the ICC factor as a cause of the uncertainty among the voters.

“Of course, in that situation, with the ICC hanging over the country it wasn’t clear even who could be allowed to stand. There were questions of Chapter Six of the Constitution affecting Uhuru Kenyatta and William Ruto. The ballot menu at the end of 2011 was still not very clear,” said Wolf.

He added: “In fact, by December of 2012 after the election was pushed by the Supreme Court to March 2013, I was surprised that we had 22 per cent who could not give us a concrete answer and that was the time this strange business was taking place between Mudavadi and Uhuru Kenyatta with who was going to be the candidate the Mt. Kenya was going to support.”

By the beginning of February in 2013, just a month to the election, Wolf says the undecided percentage of 22 per cent had dropped to only 3 per cent “because we already knew what the choices were.”

Finally, 14 months before the last August 2017 elections, Wolf points out that in June 2016 the percentage of undecided voters was 12 per cent, in January 2017 it was still 11%, early July it was 8% but in late July just two weeks before the August elections it was then 10%.

“This then raises the question when people say I haven’t made my mind, what do they actually mean? In certain communities they are waiting for the last minute to be guided by clan leaders or elders or older children in the family who tell the wazees what to do,” said Wolf.

“Ethnic arithmetic covers about half the population. People from other communities, who don’t have someone in the race who is credible there are many factors that would influence them.”

His sentiments were echoed by Former Mukurweini MP Kabando wa Kabando who noted that whatever announcement Mr. Odinga makes next month on December 9 will make a change on voters’ choices.

“By 9th of December when Mr. Odinga makes an announcement the figures on undecided will be changing. Whatever announcement he makes but it is thinly veiled the announcement will be that he will be running, that will make a change,” said Kabando on the show.

Mr. Odinga says Kenyans will definitively know where his political aspirations lie after the ODM delegates meet on December 9, 2021.