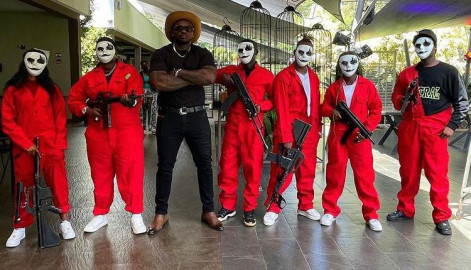 Popular rapper Khaligraph Jones has released ‘Khali Cartel 4’ featuring the top six finalists from the OdiNare Challenge that he spearheaded.

The much anticipated rap cypher comes nearly two years since the unveiling of Khali Cartel 3. The rapper made the announcement through a post on Instagram.

“After 2 years, I present to you Khali Cartel 4. Movie time. Favourite one so far,” he wrote on Instagram.

The cypher is in collaboration with artists who include: Katapilla, Shekina Karen, Murasta, Achicho, Elisha Elai and Ben-C. The music video depicts a setting that is identical to the Award winning series dubbed ‘Money Heist.’

The six chosen finalists emerged from Khaligraph’s partnership with Odibets under Odi Mtaani initiative to launch the ‘OdiNare’ rap challenge.

“I decided to release Khali Cartel 4 this year in a bid to give back to my fans who have been with me through thick and thin. After bringing the OdiNare challenge to the rap scene courtesy of Odibets." said Khaligraph.

"I released Khali Cartel 4 with the six rap challenge finalists who had proved beyond all reasonable doubt that they were the next stars in the hip hop scene.”

Kibera born-rapper Katapila was crowned as the winner of the OdiNare Rap Challenge walking away with the grand prize of Ksh.1 Million. BenC was the first runner up, garnering Ksh500, 000 and Real Elai, in third place with a Ksh300, 000 prize.

Khali Cartel 4 is the 4th rap project coordinated by Khaligraph who has previously featured other hip-hop artists such as Petra, Sagini and Timi blanco, among others.