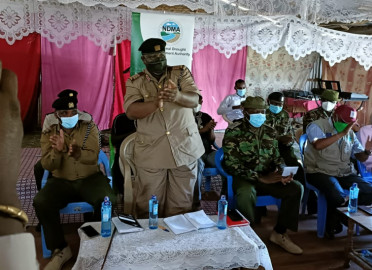 A ban on civilians carrying weapons, including knives, in major towns and shopping centres has been instituted in Laikipia County.

County Commander of Police John Nyoike said the ban comes into force immediately and anyone found with weapons risks being arrested and prosecuted in court.

This, he said, is aimed at taming increasing cases of attacks and threats by individuals against the other in some of the trading centres among them Rumuruti, Ol-Moran and Dol dol.

This was one of a series of meetings being spearheaded by the national government to encourage local residents to embrace one another and look for better ways of keeping and maintaining peaceful coexistence.

The meeting came as parts of the county continue to enjoy moments of normalcy after experiencing a spate of banditry attacks and livestock thefts that left several people shot and killed, scores injured, and houses torched in Ol-Moran division in the last two months.

During the meeting, the government officials underscored the need for respecting other people’s property and observance of the law in order to live in harmony.

They also emphasized the need for parents, especially from the pastoral communities, to enroll their children to school in an effort to help them address outdated traditions.

County Commissioner Joseph Kanyiri said it was prudent for parents to look for better ways of bringing up their children, in order to enable them effectively compete with their peers in the job market.

Laikipia North MP Sarah Lekorere and Laikipia West officer in charge of the National Police Reservist (NPR) Simon Eturen called on the government to increase the number of NPRs in the troubled areas to help boost security patrols and tackle emerging crimes.

They observed that NPRs were better placed to fight banditry attacks and livestock thefts since the officers live within the community and would respond swiftly whenever such crimes take place.

The MP also wants the government to carry out a disarmament exercise in the region claiming that there were still so many firearms in the hands of civilians which were being used to cause insecurity in the region.