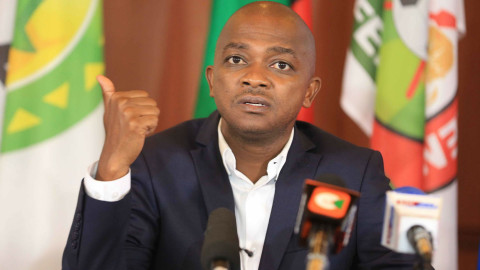 Suspended Football Kenya Federation (FKF) President Nick Mwendwa was on Tuesday released by the Milimani Anti-Corruption Court on a bond of Ksh.15 million or alternative cash bail of Ksh.10 million after failing to block his prosecution.

Mwendwa had been arraigned in court to answer for charges of fraud after he was alleged to have abused his office and swindled cash from the football authority.

The offences included four charges of fraudulent acquisition of public property, where Mwendwa is alleged to have made away with Ksh.2.5 million from the FKF on May 15, 2021 and Ksh.5 million on March 4 respectively.

He was similarly charged with illegally obtaining Ksh.1 million from the Football Federation on May 6 and Ksh.29.5 million between April 16 and May 2021 with other persons not before the court. He pleaded not guilty to all the charges.

The Ministry of Sports last month instructed the registrar of sports to audit the federation's accounts and after receiving the report, the federation was consequently disbanded and a caretaker committee set up to handle the sport in the country.

Mwendwa was initially arrested on November 12, 2021, over claims of misapplication of funds meant for the national football teams. He was released on a cash bail of Ksh.4 million on November 15, 2021 before the government dropped charges against him ten days later, asking for the file to be closed pending further investigations.

He was consequently re-arrested by detectives on Friday, November 26 and has remained in custody since then.