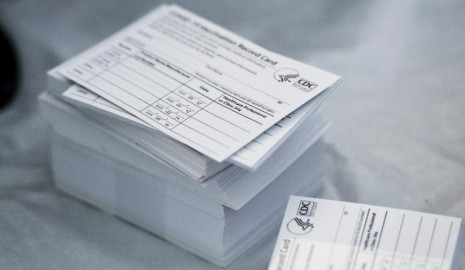 A nurse in Columbia, South Carolina has been indicted by a federal grand jury on charges of making fraudulent Covid-19 vaccination cards, according to the US Attorney's Office for the District of South Carolina.

Tammy McDonald, 53, is charged with making fake vaccine cards on June 20 and July 28, allegedly filling out vaccine cards for people she knew had not received a Covid-19 shot. She's then accused of lying to federal agents when questioned about the matter in October.

"She provided CDC Covid-19 Vaccination Record Cards to individuals and had personally filled out the individuals' identifying information and lot numbers for vaccines she knew had not been administered to those individuals," the indictment said.

McDonald has been charged with two counts of producing fraudulent identification documents and one count of lying to federal investigators, according to the indictment. She was arraigned Friday and granted a $10,000 bond, and has pleaded not guilty on all charges, according to a press release from the US Attorney's Office.

"Although the indictment speaks for itself, creating fraudulent or fake vaccine cards for those who have not been vaccinated poses a direct threat to the health of the people of South Carolina," Acting US Attorney DeHart said in a statement.

CNN has reached out to McDonald's attorney for comment and is awaiting a response.