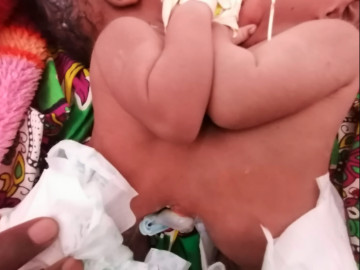 A woman has given birth to conjoined twins in Kisii. PHOTO | HYLINE OCHARO | CITIZEN DIGITAL

A 19-year-old woman on Monday gave birth to conjoined twins at Lenmek Hospital in Kisii County.

Doctors at the institution suspect that the twins, both female, could be sharing vital organs, especially the intestines.

According to lead doctor Evans Monda, the twins are joined from the chest down to the abdomen area.

An initial assessment, Monda said, showed that many of their organs are sound although they require referral to an advanced health facility for separation.

The mother, Lilian Moraa, who hails from Kiong'ongi area in Bobasi, checked in to the hospital at around 11pm on Monday after experiencing normal birth pains at 6pm.

Moraa, who termed the birth as surprising, was later rushed to Ogembo Level IV hospital before being referred to Lenmek, a private health facility, owing to complications.