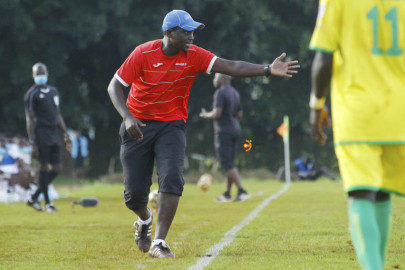 Kakamega Homeboyz coach Nicholas Muyoti instructs his charges during their FKF PL match at Utalii Grounds in Nairobi on May 14, 2021. PHOTO/Kelly Ayodi/Sportpicha

Nairobi City stars head coach Nickolas Muyoti has told his strikers to finish off their chances after his side was held in a barren draw by Nzoia Sugar on Wednesday.

Victory would have taken City Stars to within one point of the FKF Premier League top spot but the hosts were unable to find a cutting edge to their performance at Ruaraka.

“It’s an area we have been working on even during the break and we need to continue improving on. We are creating many chances but failing to convert them. Defensively I am pleased with what the team has shown so far,” Muyoti said.

The draw came off the back of last weekend’s defeat to Kariobangi Sharks, and Muyoti says they must rediscover their winning ways.

The Kawangware-based side face Mathare United in their next assignment on Saturday.

“We have seen so much improvement with Mathare United in recent games since the resumption of the league. They can be a very dangerous side so we hope to show our best qualities against them.”