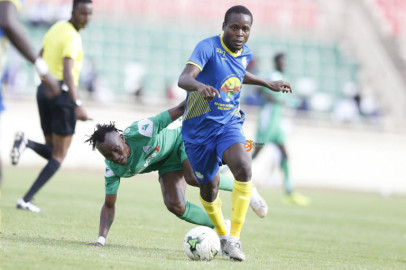 After exiting the CAF Confederations Cup, Gor Mahia have shifted their focus to the Kenya Premier League (KPL).

According to Gor’s assistant coach Sammy ‘Pamzo’ Omollo, they are now fully focused on the local league after failing to progress to the group stages of the continental tournament.

Gor were on Sunday held to a 1-1 draw by AS Otoho d’ Oyo of Congo who emerged 2-1 winners on aggregate owing to their 1-0 win in Congo.

The record Kenya Premier League champions will be eyeing to reclaim their title and will resume the local action with a match against newcomers Vihiga Bullets.

“We have now shifted our concentration to the premier league and the good thing is that we will have players who were not registered with CAF like Austine Odhiambo, Peter Lwasa, George Odhiambo and Boniface Ochieng. We are playing Vihiga Bullets this Thursday at Bukhungu Stadium and we are looking forward to a win. Our aim is to win the title this season,” said Omollo.

At the same time, Omollo bemoaned injuries for his side's elimination from Africa’s second-tier tournament.

“We really played very bad football yesterday, something which shocked me. For me I will blame the injuries we have in our squad which made us have only one sub as opposed to our opponents who in both legs made five substitutions.

Another thing is that we were playing long balls, something which we are not used to even in our local league. We were forced to play Philemon Otieno who was injured because we had no option and even Sydney Ochieng who came in as a substitute was also out of form coming from an Injury, in short we lacked depth in our squad,” added Omollo.