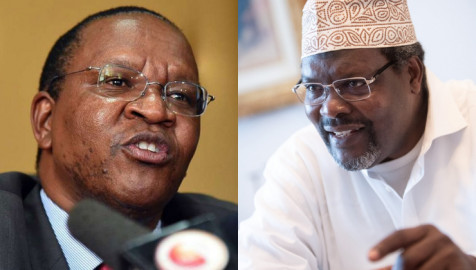 Interior Principal Secretary Dr. Karanja Kibicho has denied the Kenyan government’s involvement in the hitches hampering the return of Lawyer Miguna Miguna into the country.

In submissions presented in court on Thursday, Kibicho insisted that the government has not issued any red alerts to bar the embattled lawyer from coming to Kenya.

“I confirm that no government agency has issued any so-called red alert to Air France and Lufthansa Group (operating as German Airlines) in relation to Miguna’s travel to Kenya,” Dr. Kibicho submitted.

PS Kibicho further advised Miguna to acquire his travel papers at the Kenya High Commission in Ottawa, Canada, to facilitate his entry into the country.

Miguna had vowed to return to Kenya on Tuesday, November 15th until he was denied boarding Air France in Berlin, Germany after going through all the required processes.

In an interview on the same day, Miguna while highlighting his plight in a foreign land, said that the red alerts issued by the government had made it impossible for him to travel to Kenya.

“The customer service who had already been notified of my arrival told me quite clearly before they started checking in, they had my picture and were waiting for me,” he insisted.

“We received the red alert this morning directing us that we don't allow you to board,” he added.

High Court Judge Hedwig Ongudi on Friday, November 12, 2021, declined to issue orders sought by lawyer Miguna Miguna to facilitate his return to Kenya on grounds that it could not rely on speculations to grant the orders.

The court dismissed the application, noting that it cannot rely on speculation to grant the orders sought by Miguna Miguna.

"The case was filed prematurely without evidence and is therefore dismissed," the court ruled.

The judge said that Miguna was to prove the existence of the red alerts and he was under obligation to prove those facts.

Havi noted that the alerts indicated that the matter is no longer an issue of conjecture and that the Kenyan government is knowingly denying Miguna entry into the country, as such they have a valid argument to support their petition.