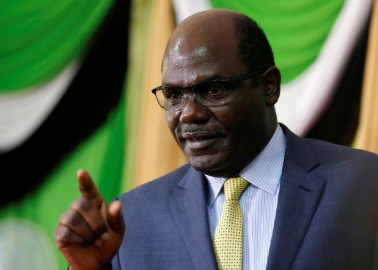 The Independent Electoral and Boundaries Commission (IEBC) chair Wafula Chebukati has advised political aspirants to desist from using the authority's logo in campaign-related materials ahead of the August General Election.

“The commission has noted a growing trend of aspirants using its logo on their campaign posters and billboards. This is an illegal act which contravenes the constitutional standing of the commission as an independent, impartial and non-partisan institution,” Chebukati said in a statement on Friday.

According to the gazette notice, the campaign period will officially commence on May 29 and end on August 6, 2022, which is two days before the polls.

“The Campaign time shall run from 7.00 a.m. to 6.00 p.m. during the campaign period. Political parties and candidates shall appoint and submit to the Commission the names of the National and Constituency Chief Election Agents to the Commission on or before Monday, 25th July 2022,” the IEBC notice reads in part.

Political outfits have been instructed to forward to IEBC the names of persons competing in party primaries, the venue and date of the primaries on or before April 9, 2022, which is 21 days before the nomination day.

Political parties planning to table presidential aspirants through direct nominations or party primaries have until April 28, 2022, to forward their names to IEBC.

The Authority will then proceed to publish the names of the candidates in the Kenyan Gazette within seven days of acquiring the names. Any disputes arising from the nominations, IEBC says, should be resolved by April 22, 2022.

“The Commission shall publish in the Gazette, the names and symbols of persons intending to contest in the election as independent candidates at least fourteen (14) days before the nomination day being on or before Friday, 13th May, 2022,” IEBC said.

Independent candidates have similarly been ordered to cut ties with any registered political parties by May 2, 2022, which is three months before the polls. They should also forward their names and party symbols to the IEBC before the aforementioned date.

“The days for the nomination of political party candidates and Independent candidates for the Presidential Election shall be between Sunday, 29th May, 2022 and Monday, 6th June, 2022,” IEBC said.

Public officers eyeing elected positions have also been ordered to resign from their state positions on or before February 9, 2022. Presidential hopefuls have also been instructed to submit a list bearing the names, respective signatures, identity cards or passport numbers of at least 2000 voters registered in each of a majority of the counties on or before May 23, 2022.

According to Chebukati IEBC will continue to notify Kenyans of numerous electoral timelines and activities as well as their repercussions as they emerge.