Ojienda calls for consistency as Shabana roars on 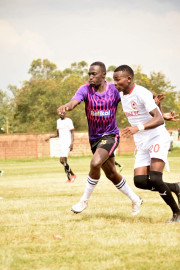 Shabana tactician Robert Ojienda is confident his side will continue their ascendancy in the National Super League following their 2-1 win against Dandora Love on Sunday at the Green Stadium Awendo, their fourth win on the bounce, which moved them to third on the log.

Ojienda whose side made it four wins out of four since the last week of December has lauded his charges for sticking to their game plan against Dandora, urging them to carry on with their fine form against Kisumu All-Stars in their next assignment next Sunday.

The glamour boys who are two points adrift of league leaders APS Bomet could go top of the NSL summit should results go their way next weekend.

Speaking to Citizen Digital at Awend Green Stadium, the seasoned tactician reiterated his ambition of maintaining consistency in their performances this season, a feat that proved costly last season, as they eye a promotion berth at the end of the season.

“My players played well given the toughness of our competitors. They are a good side as they gave us a good match.

“Our focus is to play one game at a time as it will help us attain more consistency.”

His opposite number James Nandwa rued costly mistakes that led to Shabana’s two goals in the first half, terming their latest setback as a wakeup call for his struggling side if they are to finish higher on the log at the end of the season.

“We made costly mistakes that led to both goals and I feel this is a reminder of the uphill task that we have to conquer if we are to avoid slipping into the relegation zone.

“I believe we’ll get better with time starting from our next assignment against Mwatate in Wundanyi.”