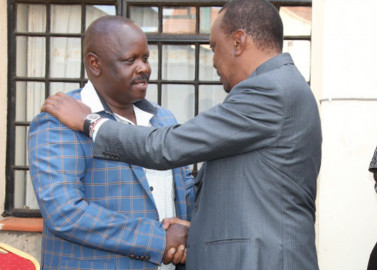 The one-time Bomet governor revealed that the Head of State reached out to him following the aftermath of the polls whose outcome they, as NASA, disputed.

Ruto stated that when their then NASA presidential flagbearer Raila Odinga and his team were planning a mock swearing-in ceremony, President Kenyatta called him to in a bid to try and convince him otherwise.

“President Kenyatta called me and said we should not drive the country into a chaotic situation…We engaged four times, and he asked which was of a greater good, the complain about mismanagement of the election or saving the country from going into chaos,” Ruto said in an interview with Nation newspaper.

He noted that the move by the president impacted his decision to ditch NASA and support the ruling party, Jubilee, despite his loss as Bomet governor to Dr. Joyce Laboso.

He also pointed out that the then United States Ambassador to Kenya Robert Godec who was in talks with the contesting party to bring about peace in the country also influenced him.

“I agreed to work with the President because of the engagement and also after a talk with the then US envoy Robert Godec,” Ruto explained.

The CCM party boss similarly spoke on the fallout with NASA as having been fueled by internal strife and disagreement within the coalition’s principals in the same period.

“We did not dispute the entire election. But within NASA, Kalonzo Musyoka and I thought we should go to court. But others wanted to have the country split into Kenya A and Kenya B,” said Ruto.

“That was simply not acceptable to me. I thought, where should Bomet then go to? A or B? I disagreed with my NASA co-principals on that.”

When asked why he resolved to support Deputy President William Ruto’s presidential candidacy in the 2022 elections, he said that the DP’s ideologies are aligned with his.

“There was absolutely nothing wrong when we mended fences with Dr Ruto in January last year. I have no quarrel with him on personal issues. When the DP started expressing concern about the people in the jua kali sector, I realized we had the same concerns,” said the former Bomet govenor.

Consequently, the CCM leader dismissed claims of dismantling his party to decamp to the DP’s United Democratic Alliance (UDA) party, highlighting that he still has no faith in its nomination process and cannot count on it to succeed in the forth-coming elections.

“If I had gone to Jubilee, I would not have survived the nomination. It is the same case if I go to UDA today. Someone can interfere with the nomination,” he said.

In his quest for the Bomet gubernatorial seat, Ruto will be facing off against the incumbent Governor Hillary Barchok and Mining and Petroleum Chief Administrative Secretary (CAS) John Mosonik.