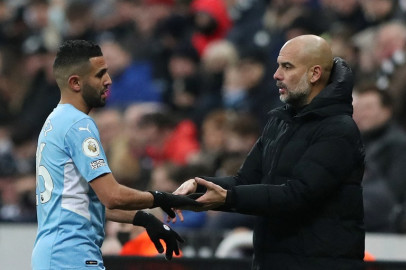 The Premier League's unique tradition of playing on Boxing Day and New Year's Day should not change but they must allow five substitutions to protect players amid a gruelling schedule, Manchester City manager Pep Guardiola said on Thursday.

Top flight leagues in Europe adopted the rule to increase the number of substitutions per game to five to ease the workload on players amid the COVID-19 pandemic but Premier League clubs voted against the motion.

While most leagues head for a winter break, English teams are also set to play three times from Dec. 26-Jan. 2. But with more games postponed due to COVID-19 outbreaks, Guardiola said it was time the league adapted to changing circumstances.

"The tradition from Boxing Day is massively important. It's a characteristic of this league. It won't change... Boxing Day is so nice for families to all go together to the stadium," Guardiola said ahead of Leicester City's visit on Sunday.

"The problem is the fixtures, the calendar, 365 days a year, the international teams with huge competitions and a lot of games... The players have two-three weeks holiday in the summer, then the season (starts) again, it's too much.

"Today managers talked with the Premier League and broadcasters and decide what is the best for everyone. The welfare of players should be the most important... This is the only country to not accept five substitutions, just three. Why?

"We want to protect the players, so bring five substitutions. It's much better for the amount of games, but the Premier League and clubs decided 'no'."

Players and managers have said player welfare is not being taken seriously enough while COVID-19 exacerbates the situation and Guardiola said they should probably come together and go on a strike, although he did not want it to come to that.

"Just words won't solve anything. (For) UEFA, FIFA, the Premier League, the broadcasters, the business is more important than the welfare," Guardiola added.

"Maybe we need a strike for people to take attention... (but) we want to play, make people happy over December and play games. We love to do that.