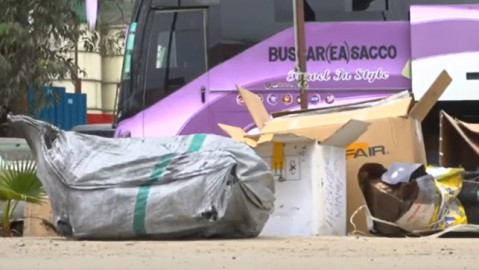 Detectives in Nairobi are holding two suspects believed to be part of a syndicate notorious for attacking boda boda operators with relatively new motorcycles, stealing their bikes before selling them into a neighbouring country.

This came after detectives tracked a bike that had been dismantled and packed as parcels in a Moyale bound bus along the Thika Super High way.

Following an intelligence-led operation, the bus was impounded and taken to Capitol Hill Police Station in Nairobi.

What detectives had earlier thought to be one motorbike ended up being five.

“Detectives placed a different kind of tracker, so they disabled the one that was fitted but could not trace the other one,” stated Nairobi County Police Operations Chief Said Kiprotich.

The bike they were trailing was bought just last Friday when the dealer suspected the individuals who presented themselves seeking to have it on loan.

Maurice Nyang’au, who deals motorcycles then says they tracked it to Kyamaiko where one of the trackers was disabled before being ferried to Eastleigh as a parcel.

“Then the multiagency team tracked the bus and at mid night it was headed to Moyale they stopped it at Ruiru along the Thika Superhighway...,” said Maurice.

Bus staffers stated that the suspects who were arrested after leaving their details when they checked in the goods, refused to comply with the security procedures saying they did not have keys to the storage boxes.

The five intercepted bikes are just a fraction of many more that have slipped through into Ethiopia where the bodaboda stakeholders say there is ready market without putting into consideration documentation.

The two suspects who are in police custody are expected to be arraigned Monday.