My step-mum breast fed me as a baby after my mum fell ill, Tuju says 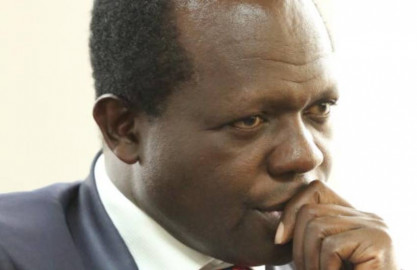 Raphael Tuju, the Secretary-General of the Jubilee Party, has praised his stepmother for raising him as his own son, including breastfeeding him.

Tuju, who is currently mourning the death of his mother Mama Mary Tuju, said his childhood was spent in a loving environment, which is uncommon in polygamous families.

“My step-mother, I mean my mama’s co-wife, breastfed me. It happened that my mother became unwell for some time,” recalled Tuju in an interview with Nation.

“Her co-wife had unfortunately lost a baby and that meant she still had her milk in her breasts. She agreed to feed me for some time.”

Tuju further disclosed that the two have had a close relationship since, adding that she has been a strong pillar in his life since his mother passed away on November 17.

“She is the one I consult at home. She even led me to the Anglican church I attend today. She was the first one I called when mum passed on,” added Tuju.

Mama Mary passed away while undergoing treatment at a Nairobi hospital aged 87.

Tuju eulogized her as an independent woman who instilled useful skills to him from a young age and supported him unconditionally.

“She taught me coping mechanisms. She taught me wealth creation at a tender age. She never depended on anyone,” he said.

“We were close with her. My dad complained on many occasions that I only listened to my mother. After Dad died, I was the only one she allowed to call her by her pet names,” added Tuju.

In his condolences to the family, President Uhuru Kenyatta described Mary as a hard-working community leader and elder who greatly valued and supported education.

“Her belief that education was the foundation of life was the inspiration that led many from her community to pursue education, and become productive members of society,” stated the president.

Mama Mary will be laid to rest on Saturday, November 27 in Rarieda, Siaya County.

Among the dignitaries expected to grace the occasion is President Kenyatta and ODM leader Raila Odinga.