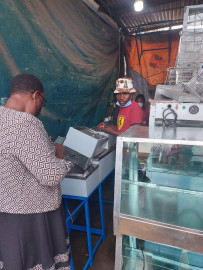 Twitter-famous chips Mwitu vendor Beverlyne Kwamboka received a boost on Friday from Senator Beatrice Kwamboka who offset her rent for the next three months.

She also received a potato chipper, to make the tedious potato slicing easier, 20 litres of cooking oil and two sacks of potatoes.

She also seized the opportunity to throw shade at 2022 Nairobi County MP hopeful Millicent Omanga who she previously differed with on Twitter.

Kwamboka, third-year Bachelors of Education student at Kenyatta University was staring into a bleak-future, after her business which was operating under a bridge risked closure.

Her business had attracted the attention of Kenyans and politicians alike, with Ms Omanga dispatching her team to boost Ms Kwamboka’s  business.

But the viral vendor would later refute claims that Ms Omanga had given her cash to support the business. Saying they only brought potatoes worth Ksh 350, umbrellas and aprons.

“They bought a bucket of potatoes worth Sh350, gave me some umbrellas, aprons and reflector jackets…they then took photos holding a sack of potatoes that I had bought.“

There was a commotion here after Omanga posted on Twitter that she had given me merchandise and cash. I sent his PA a message asking about the cash donation but he clarified that they had used it to buy the bucket of potatoes,” she said