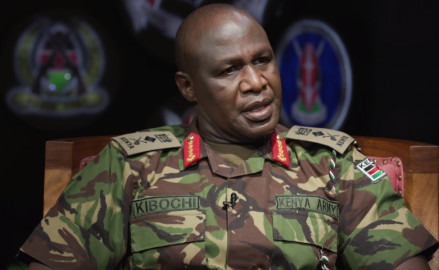 The Chief of the Kenya Defence Forces (KDF) General Robert Kibochi has insisted that development agenda in Somalia has to be pushed aggressively by the international community to completely rid the country of Al-Shabaab militants.

According to Kibochi, the Al-Shabaab threat has been watered down considerably by the multinational defense forces AMISOM, but economic and social development are necessary to deter the militia group from signing up new recruits and making a comeback.

“Have we gotten to the main stage? Not yet. The reason being what has happened is that we have been applying a kinetic force where we are hitting the enemy, what needs to be done is bring in development. People in the area need to see development coming in, schools reopening and children going to school so you can dry the pool where the Al-Shabaab recruits from,” Kibochi, Kenya’s only four star general, said on Citizen TV’s JKL Show on Wednesday.

To this effect, the General consequently reiterated that the development agenda had proved successful in Sierra Leone during the early 2000s when countries rallied together to disperse the RUF militia group that was prevalent in the area.

“The same thing happened in Sierra Leone, we went there to liberate the place but development came into play later and the country is now thriving,” he said.

Kibochi similarly insisted that despite the AMISOM forces scheduled to go for a restructuring, the forces will continue helping in the fight against Al-Shabaab and they will prove vital in the complete liberation of Somalia.

“There is a debate coming up at the security council that is looking at how AMISOM can be reconfigured and our thinking has always been that now that we have been able to degrade the threat it is time for us to bring in other dimensions we need to bring in the economic dimension. There are no threats in Kismayu because of AMISOM,” Kibochi added.

“Strategic communications is not really a new direction, it is a path that many modern defense forces are taking because warfare has changed dramatically because of technology advancements,” he said.

“Information is one of the elements of national power together with diplomacy, military and economics and therefore for the KDF to be relevant in modern warfare we have had to think how to develop our capability and this is a capability that allows us to sharpen our arrowhead to be able to fight.”

Kibochi however called on members of the public to remain vigilant in the war on terrorism citing that the battle should be fought on all fronts and by every member of the society.