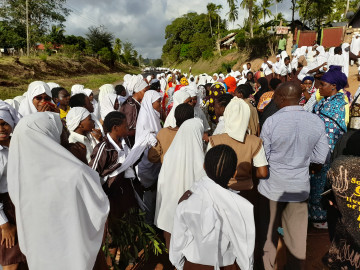 Learning was disrupted at Mwamgunga Girls Secondary School in Kwale County after students and parents took to the streets citing poor management by the administration.

The school head teacher Winrose Mwaniki – however – denied all the accusations levelled against her terming them unfounded and politically instigated.

She said on phone: “The parents do not pay school fees on time. These accusations are unfounded and political.”

She said the demonstrations were politically instigated. The demonstrations halted transport activities along the Kwale Kombani Road at Tsimba trading centre – with businesses in the small town paying the price.

The students engaged Police officers from Kwale in a running battle after erecting roadblocks on the main road using boulders and tree branches.

The school board chair Mr Juma Gavuga blamed the head teacher for working in isolation and dictating how the school should be run – besides bullying teachers. He said the community was unhappy with the head teacher – and accused to rationing water in the school thereby affecting the girls.

It took the intervention of Kwale governor Salim Mvurya – whose entourage was also blocked by students – to diffuse the demonstrations and have the road cleared. The governor who addressed the students and parents promised to look into the matter.

“I want you to stop blocking the road because I am going to address the issue urgently,” said the governor. Adding: “I urge you all to maintain peace as my office will work on ways to ensure sanity is restored at the school and ensure students go back to class.”