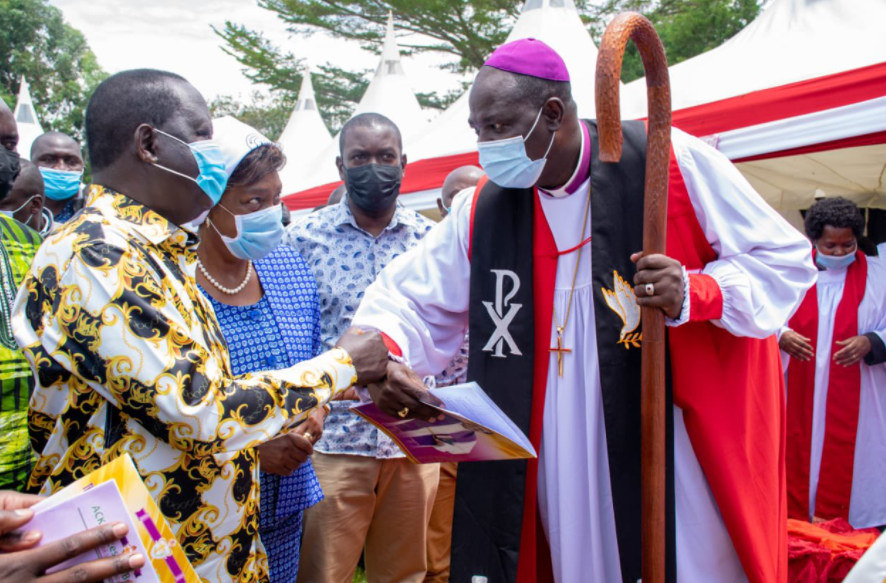 ODM leader Raila Odinga and his ANC counterpart Musalia Mudavadi were among the first victims of the directive as they were on Sunday forced to sit quietly in the congregation at a ceremony in Butere.

The Anglican Church has renewed its ban on all politicians from speaking in church.

ODM leader Raila Odinga and his ANC counterpart Musalia Mudavadi were among the first victims of the directive as they were on Sunday forced to sit quietly in the congregation at a ceremony in Butere.

The announcement came as Nyeri Catholic Diocese Archbishop Anthony Muheria pleaded with catholic priests in the country to reclaim the altar.

In nearly every part of the country, the Sunday service has become the new political rally following the ban on political gatherings over COVID-19.

Political leaders among them Raila, Mudavadi COTU Secretary General Francis Atwoli, governors and MPs who had come to witness the consecration of the first female bishop of the Anglican Church in the country were all hence simply forced to sit through the event, none allowed to address the gathering.

“In the church, everybody is welcome, but we have the pews and the pulpit. The pulpit is for the clergy and the pews are for everybody who came to worship,” said Ole Sapit.

The seeming takeover of churches by the politicians has put the clergy under pressure with claims that they have surrendered their authority to politicians in favour of handouts.

The Catholic that had also banned politics from the pulpit, says there is no turning back on the move to keep the politicians at bay.

“I plead with all Catholic priests, especially in my archdiocese, that we be firm, that the politicians have a space to come and pray, but have no space to speak in our churches,” said Anthony Muheria - Archbishop, Nyeri Catholic Diocese.

With less than eleven months to the next general election, the clergy say the leaders have abused church premises and are beginning to compromise the role of the church in society.

“We have also seen that the church is becoming now the battle ground for political expediency, and the church is no longer identified as a place of worship, and the media is not helping us in this respect because whenever a sermon is given they don’t air it, their air political statements given in the church,” added Ole Sapit.

Muheria, on his part, added: “Because of their greed for votes and popularity, they decided the places of worship are owned by them. They’re demanding, in places of worship, to have a political rally to address people. The Catholic Church has said it very clearly, that we will not allow the politicians to speak in our churches.

Last year a similar order was given by several churches, but it was largely ignored.

It remains to be seen whether the latest ban will truly keep the politicians at bay or will turn out to be one of the many promises made in the country never to be fulfilled.