Kabogo, Billow Kerrow to be charged with incitement – Detectives 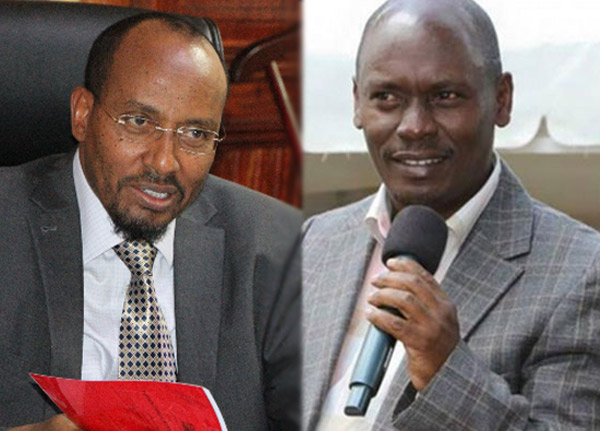 The Directorate of Criminal Investigations has recommended the prosecution of Mandera Senator Billow Kerrow over allegations of incitement to violence and disobedience of the Law.

In a file submitted to the Director of Public Prosecutions Keriako Tobiko, DCI stated that it had reached the decision to call for the prosecution of Senator Billow Kerrow after carrying out an inquiry into allegations that the senator had incited his constituents into violence by alleging that the Kenya Defence Forces was involved in extrajudicial killings in Mandera County.

Kabogo is accused of uttering words that amounted to ethnic contempt in an event held on November 25, 2015 at Thika Municipal Stadium.

While addressing a cheering crowd, Kabogo said: “If Muthama insults (President) Uhuru again; we will go for him in his mother’s house.”

The recommendations against Kerrow are based on last month’s incident where the Senator together with several legislators from the county called for investigations into acts of extrajudicial killings in the area, after a woman was reportedly found buried in a shallow grave at Lethe in Mandera East Constituency.

Senator Billow Kerrow later apologised over the claims just hours after Interior Cabinet Secretary Joseph Nkaissery ordered all those who made the allegations to apologise or face arrest.

Despite issuing an apology, Kerrow was arrested alongside five other MPs over the utterances and was reportedly taken to the Directorate of Criminal Investigations Headquarters on Kiambu Road in Nairobi to record a statement over the claims.

Nkaissery termed the allegations as alarmist, saying they frustrate the war against terror. He claimed Kerrow’s sentiments were an intentional ploy aimed at propagating political agenda in order to paint the government in bad light.

“Nothing was found in the 15 sites that were dug. Excavators were brought in but still found nothing,” noted the CS.

He stated that 3000 youths had returned from Somalia after leaving the Al Shabaab militant group and noted that it was wrong to assume any missing persons had been killed by security agents.

The Kenya National Commission on Human Rights later sent a team to probe the allegations of mass graves in Mandera, and noted that one body had been exhumed and a post-mortem done.

The commission chair Gakuria Mbogori stated that no other bodies had been found in the exhumation exercise but said they were awaiting a full report from their team.

The woman was identified as a mother of five who operated a kiosk at Arabia and was allegedly taken from her kiosk at 1pm on December 4 by armed people dressed in army uniform.