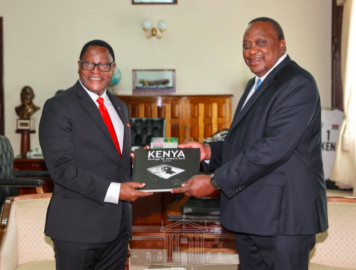 Speaking at State House Nairobi, President Kenyatta underscored the importance the Joint Permanent Commission of Cooperation (JPCC) will play in securing the prosperity of the people of Kenya and Malawi in the present and future.

“It falls on us and the next generation to innovate and transform our societies through economic emancipation and genuine political independence and it is this spirit that we held the third Kenya- Kenya Malawi commission for corporation.

The JPCC is an important mechanism for strengthening our relations and unlocking the unlimited political, social economic and diplomatic relations for the benefit countries for the benefit of our people,” President Kenyatta said.

Kenyatta added that by signing the instruments of cooperation, Kenya and Malawi relations will prosper for years to come.

The signing of the eight instruments of cooperation in areas such as defence, political and diplomatic consultations, health and cooperatives, tourism, diplomatic trade, fisheries management and aquaculture development will herald a new dawn in Kenya-Malawi bilateral relations that without doubt will be dominated by years of success,” Kenyatta added.

President Kenyatta similarly urged both the Kenya and Malawi governments to ensure that the MOUs for the remaining agreements are fast tracked, implemented and effected in the shortest possible time.

“I urge both governments to expedite the negotiations of the remaining agreements so that the two nations can fully unlock the potential of their bilateral ties for the benefit of our citizens,” Kenyatta said.

On his part, the Malawi president insisted that he remains committed to working with Kenya in the realization of the agreement that if well employed will answer the continent’s and the two nations’ problems.

“I echo your president’s call to speed up the process of the remaining agreements so that we can work together together and develop both our nations. I am looking forward to genuinely sharing with the Kenyan people all things that will enhance our transformation and am I looking forward to better Africa Multilateralism spearheaded by our two nation’s bilateralism,” President Chakwere said.

Earlier, President Chakwera, who was accompanied by Malawi's First Lady Monica Chakwera, was received at State House, Nairobi by President Uhuru Kenyatta and First Lady Margaret Kenyatta in an elaborate state reception ceremony that included a guard of honour mounted by a detachment of the Kenya Army and a 21 gun salute.