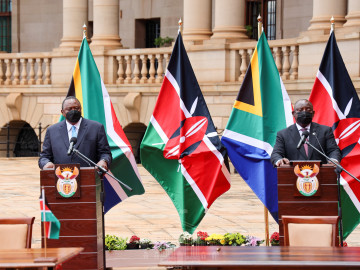 President Uhuru Kenyatta has concluded his 3-day State visit to South Africa where he had travelled on invitation by his South African counterpart Cyril Ramaphosa.

The visit, which took place from November 22 to November 24, saw the two leaders hold wide-ranging discussions on the two countries bilateral relations and other areas of mutual interest for Kenyans and South Africans.

“The two leaders directed the respective Ministers to ensure implementation of Agreements and MoUs executed, and decisions taken,” reads the statement.

The two further divulged that they had agreed to strengthen the countries’ trade ties through increasing both the volume and composition of bilateral trade as well as investing more in each other’s economies.

The meeting also saw the signing of the Strategic Partnership Framework between South African Airways and Kenya Airways, aimed at facilitating more trade and investment and enhancing people to people exchanges between the two countries.

“Kenya will be looking to South Africa for support in knowledge exchange and human resource development in the areas of primary, secondary and emergency healthcare provision; opportunities for medical training in Kenya’s health priority areas; strengthening disease prevention and epidemic surveillance; technological transfer and capacity building in research, development and production of pharmaceuticals, human vaccines, biologicals and medical devices,” the statement further states.

Additionally, Kenyatta and Ramaphosa held talks on simplifying visa processes and enabling easier movement of people between the two countries, including the recent launch of the e-visa system.

Ramaphosa also noted that President Kenyatta in turn invited him to Kenya for a State visit.