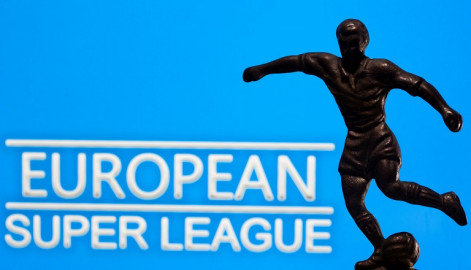 European soccer's governing body UEFA has welcomed the Council of the European Union's decision to adopt a resolution on the European Sport Model, which calls for strengthening of "value-based organised sport" on the continent.

The resolution was unanimously approved by sports ministers on behalf of the EU's 27 member states on Tuesday and follows a European parliament resolution this month that opposed "breakaway competitions."

Twelve of Europe's leading clubs announced in April that they intended to create a new Super League and break away from UEFA's established Champions League competition.

After a hostile reaction across the game and from fans and governments the move collapsed, with all six English clubs plus Inter Milan, AC Milan and Atletico Madrid withdrawing.

Real Madrid and Barcelona plus Juventus have continued to push the idea, however, and proceedings have continued in a Madrid court that stopped UEFA punishing breakaway clubs.

"This is a landmark statement of intent from the EU member states; there can be no doubt left that Europe and European sport will succeed in protecting and promoting our European Sport Model," UEFA President Aleksander Ceferin said.

"We now have a long-term plan of action at the European level to defend a values-driven, socially embedded, and open vision of European sport.

"With this backing for our model, European football will continue to be the leading example of this."

UEFA said the resolution emphasises the need for sports organisations to continue to strive for more transparency and improved governance - including reforms advocated or already implemented by UEFA.

"In addition, it calls for more stakeholder inclusion in decision-making processes, specifically in respect of fans and athletes," UEFA added.

"UEFA looks forward to furthering these discussions with major football stakeholders in the framework of the convention on the Future of European Football."