Biden says he has a plan to protect Ukraine from Russia 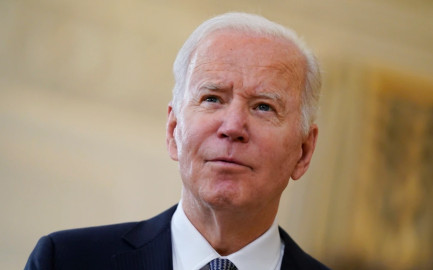 President Joe Biden listens to a reporter's question at the White House on Dec. 3, 2021.

U.S. President Joe Biden told reporters Friday he has been developing a set of initiatives that will make it “very, very difficult” for Russia to escalate the situation at its border with Ukraine, where Moscow has been building up troops and equipment for weeks.

The situation at Ukraine’s eastern border has raised fears Moscow is planning to invade its neighbor. Russian aggression was the focus this week of a NATO foreign ministers meeting, with NATO Secretary-General Jens Stoltenberg warning Russia that any escalation of the situation would come at a high price.

In turn, Moscow has suggested the U.S. and Ukraine might launch their own offensive.

The Washington Post reported Friday that Russia is planning a multifront offensive into Ukraine, involving up to 175,000 troops, as early as next year, citing U.S. officials and an intelligence document obtained by the newspaper.

The U.S. Defense Department says it is “deeply concerned by evidence” Russia is planning “aggressive actions” against Ukraine. However, department spokesman Lt. Col. Tony Semelroth had no comment on the report that the potential Russian offensive could include 175,000 troops operating on multiple fronts.

“We will not get into intelligence assessments,” Semelroth said. “However, we are deeply concerned by evidence that Russia has made plans for aggressive actions against Ukraine. As we have said, we continue to support de-escalation in the region and a diplomatic resolution to the conflict in eastern Ukraine.”

Earlier Friday, Ukrainian Defense Minister Oleksii Reznikov said Russia has now massed more than 94,000 troops near Ukraine's border, suggesting to him that they could be preparing for a large-scale military offensive at the end of January.

When asked about the situation during remarks at the White House on Friday, President Biden told reporters he has been in constant contact with U.S. allies in Europe, and with Ukraine. He said Secretary of State Antony Blinken and national security adviser Jake Sullivan have been engaged extensively.

Biden said his administration was "putting together what I believe to be the most comprehensive and meaningful set of initiatives to make it very, very difficult for Mr. Putin (Russian President Vladimir Putin) to go ahead and do what people are worried he may do. But that's in play right now."

The president offered no details about what his initiatives might be.

The Kremlin said Friday that arrangements were also being made for a video call between Biden and Putin in the coming days.

White House press secretary Jen Psaki said Friday that the Biden administration had “engaged in the possibility” of such a call.

“It certainly would be an opportunity to discuss our serious concerns about the bellicose rhetoric, about the military buildup that we’re seeing on the border of Ukraine,” Psaki said.

Putin’s foreign affairs adviser Yuri Ushakov told reporters Friday that during the call between the leaders, Putin would seek guarantees to prevent NATO from expanding into Ukraine.