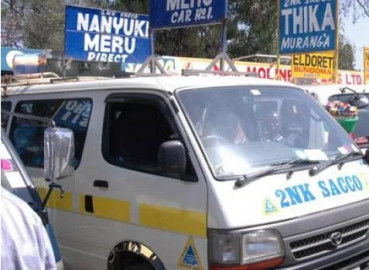 Police in Kirinyaga are on the hunt for 14 students from Fred’s Grammer Mixed School who fled from a Nairobi bound matatu after allegedly dismissing warnings from the driver and indulging in bhang and alcohol.

According to the Directorate of Criminal Investigations (DCI), the students boarded the 2NK Sacco Matatu at Karatina bus stage on Friday en route to Nairobi for their mid-term break.

As the vehicle approached Kibingoti area along the Nyeri-Nairobi Highway, the driver, John Maina, noticed a strong whiff of bhang emanating from the back of the matatu.

“Upon checking the rearview mirror, he was shocked to see billowing smoke as the seemingly excited teenagers passed a joint amongst themselves, while others imbibed alcoholic drinks,” the DCI said in a statement.

"The concerned driver urged them to stop but the intoxicated students became unruly threatening him with dire consequences, as others warned him to mind his business and concentrate on driving them to Nairobi.”

With his warnings falling on deaf ears, Maina decided to drive the matatu to Sagana Police Station but the students were quick to catch up on his plan.

“The students who were quick to notice the sudden detour, hurriedly disembarked from the vehicle as it made its way to the station. They dangerously jumped from the windows of the matatu, leaving their half smoked joints, half-filled bottles of liquor and luggage in the vehicle,” added the DCI.

Following the incident, detectives at Sagana police station summoned the school’s principal to help them identify the students.