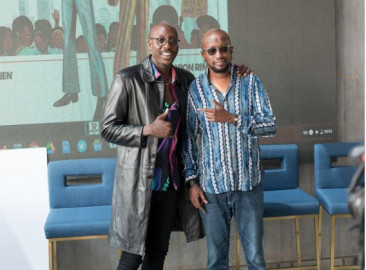 Bien Aime-Baraza Aaron Rimbui during the launch of their EP. PHOTO | COURTESY

Sauti Sol band member Bien Aime-Baraza and music producer Aaron Rimbui have come out to talk about how they met and decided to work together.

The two, speaking on Citizen TV’s 10 over 10 show, revealed that they have been friends for a long time despite the fact that Rimbui lives abroad.

“Upon him travelling to Kenya from New York, we had a meet and decided to do music together,” said Bien, adding that since they’re both bald-headed, they settled on the title ‘Bald Men Love Better’ for their project.

“Aaron lives in New York. I didn’t pick him, he didn’t pick me; life picked us to be together at that moment,” added the Sauti Sol lead singer.

Rimbui, on his part, acknowledged that it was a new thing for him to get into the pop world, however adding that the fact that they have worked together before contributed a lot to putting him at ease as the vibe was natural.

“It’s a blending of two worlds. I’m a jazz instrumentalist and Bien is a pop star. We came together and that is what our album is about,” he said.

Bien explained that the ‘bald men’ movement he is spearheading is about self-love, self-acceptance and self-worth.

“When you accept yourself, you shine outwardly. The bald-head movement is not about having no hair. I am a rasta man from deep inside. The philosophy is one that leads with love,” said Bien.

While writing the EP, they touched on phrases that are relatable to his fan base, so that the fans can connect with the album a whole lot more.

“We decided to turn the old into the new by trying to tap into different types of energies and music that has inspired and influenced us over the years. The only emotion that we want to leave people with after listening to the album, is feeling better about yourself, than you did before,” said Bien.

The two stars mentioned that they will be working on another project soon.