'Impunity all over!' Miguna claims Kenyan embassy in Berlin denied him travel documents 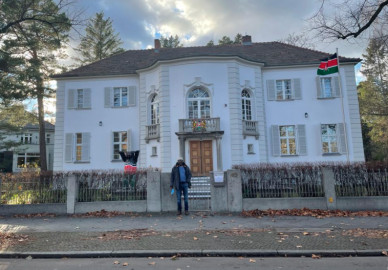 Miguna Miguna at the Kenyan embassy in Berlin, Germany, on November 22, 2021. PHOTO | COURTESY

Embattled Kenyan lawyer Miguna Miguna now says officials of the Kenyan embassy in Berlin, Germany, refused to issue him with travel documents as ordered by a Nairobi court on Monday.

Miguna, in a series of tweets a few hours after the directive, claimed that the Kenyan Ambassador to Germany unceremoniously left office barely ten minutes after he arrived, leaving him in the company of the embassy officials.

He alleged that the officials  informed him that they had been threatened with the sack if they issued him with the documents he sought.

According to the outspoken lawyer, the officials claimed to have received express orders from powerful unnamed people in Nairobi not to comply with the court order.

“Arrived at the Kenyan Embassy, Berlin at 1:50 PM. Amb. Tom Amolo hurriedly left at 2 PM. Ushered to the Boardroom by Emma Mabinda, Karuma and Esther Mungai and told that if they comply with Justice Ong'udi's Order and issue me with a Travel Document, they would lose their jobs,” he wrote.

“Emma Mabinda specifically told me that she has received instructions from Nairobi not to comply with the Court Order. She asked me for proof of Kenyan citizenship and I showed her my National ID card. She demanded a ‘Certificate of Regaining Citizenship.’”

He added: “I asked her to show me the "Certificate for Losing Citizenship," but she stated that she did not have the same. Mr. Karuma then said that "the court Order you are speaking about is rumours and maybe has been appealed." Impunity all over the place.”

Miguna had earlier been directed to obtain his emergency travel documents from wherever he is, in order for him to be allowed into the country.

In a ruling delivered on Monday, Justice Hedwig Ong’udi said that with the relevant documents, Miguna will be allowed to  board the next available flight to Kenya.

During the same ruling, the court said that Miguna cannot be allowed to use the Kenyan identity card as a travel document as it is not permitted

"It is only upon entering Kenya that he will use his  ID for identification since he does not have a valid Kenyan passport," Justice Ong’udi said.

"The orders issues by Justice Korir  on the use of the ID card were only for purposes of identification only, and not travels  since the applicant does not have a valid Kenyan passport,"

According to the court, the requirement of a passport is uniform to all Kenyans and is needed at all airports across the globe.

Miguna had however, on the backdrop of the judgement, claimed he would not visit the embassy to apply for his citizenship as he maintained he never lost it in the first place.

“I'm not visiting the Kenyan Embassy to apply for citizenship which I never lost. The Court has once more affirmed that I am a Kenyan by birth who must enter Kenya as a Kenyan upon presentation of my National ID card. The Embassy has been ordered to issue a travel document,” he wrote.