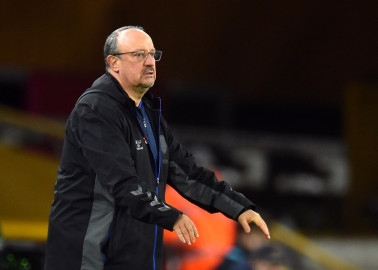 Everton manager Rafa Benitez has issued a rallying cry to the ailing Premier League side's supporters, urging them to get behind the team when they host rivals Liverpool in the Merseyside derby on Wednesday.

Injury-depleted Everton are without a victory in their last seven league matches - having lost five of them - and are 14th in the table with 15 points after 13 games. Liverpool are in third spot, two points behind leaders Chelsea.

Everton's players were jeered following Sunday's 1-0 defeat at promoted Brentford, but Benitez said he did not expect a negative atmosphere in what will be the club's 239th meeting with Liverpool.

"... I think the fans are intelligent and they know we need them. The fans are crucial and the main thing for us," former Liverpool boss Benitez told reporters on Tuesday.

"If they're behind the team, you could see the atmosphere in the first game - they were behind us, and the team was reacting. I think they'll realise how important they are for the players.

"We started the season doing really well and everyone was happy with that. Because we don't have good results now, you can question everything ... We have to be sure we continue supporting the team, continue pushing. We'll be better, we want to."

Everton will be without the injured Dominic Calvert-Lewin (quadricep), Yerry Mina (hamstring) and Tom Davies (knee) for the game at Goodison Park.

"The problem for us was we were missing key players in key games and this didn't allow us to perform at the level we were at in the beginning of the season," Benitez added.

"Now we're managing a situation that's not easy because the results are not good enough, and normally you lose confidence. For us, the derby is a massive game because we can get three points and start building on that."