Kinoti is being victimized by the Judiciary because he is under the Executive, Gladys Wanga says 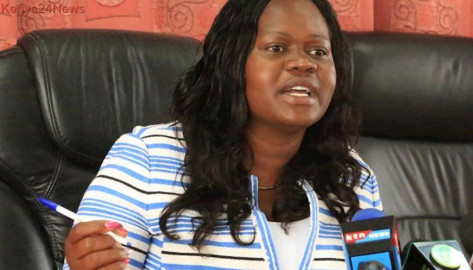 Homa Bay Woman Representative Gladys Wanga is accusing the Judiciary of being too hard on the executive arm in its recent court rulings.

Wanga claims that Director of Criminal Investigations Goerge Kinoti is being victimized because he is under the executive, citing the recent squabble between Kinoti and businessman Jimi Wanjigi over confiscated firearms, which resulted in the former being sentenced to four months in prison.

“This thing on the DCI seems to be an extension of this pursuit of vendetta… Kinoti is a diligent officer of the law and if  you look at the processes post the orders that have been issued for his imprisonment, he is pursuing the legal process,” stated Wanga in an interview with Citizen TV on Thursday.

“He has said that the firearms are with the firearms board but nobody seems to be listening to that side of things.”

She claims the judiciary is seeking retaliation for President Kenyatta's refusal to appoint six judges recommended by the Judicial Service Commission in June.

“After the issue of the judges, you realize that the judiciary became very fierce against the executive and anything the president is doing.

Lately, the judiciary seems to be hitting hard at everything executive. There have been a series of judgements where you sit and wonder, really, where is the problem?” posed Wanga.

The woman representative claims that the government's Martha-Koome-led arm has a responsibility to "appear as neutral as possible," and that it should refrain from using its power for personal gain.

Her remarks come after the High Court refused to overturn DCI Kinoti's four-month prison sentence and ordered that the case be heard on Thursday.

Attorney-General Kihara Kariuki had filed an application with the High Court, asking for Kinoti's sentence at the Kamiti Maximum Prison to be suspended pending the hearing and decision of his petition.

Kinoti was sentenced to four months in prison for contempt of court last Thursday after failing to comply with court orders to return firearms seized from businessman Jimi Wanjigi in 2017.

He has since maintained that he does not have custody of the firearms.