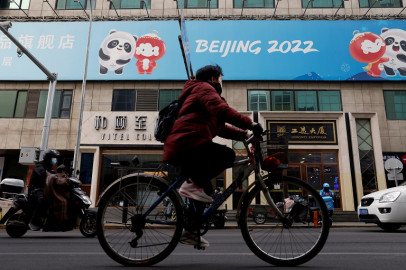 A man rides a bicycle past the sign of a flagship merchandise store for the Beijing 2022 Winter Olympics in Beijing, China December 8, 2021. REUTERS/Carlos Garcia Rawlins

The United States on Monday said its government officials will boycott the Beijing Winter Olympics because of China's human rights "atrocities", just weeks after talks aimed at easing tense relations between the two superpowers.

China said the US will "pay the price" for its decision and warned of "resolute countermeasures" in response.

Despite the threat, Morrison said Canberra will join the diplomatic boycott of the next Winter Olympics.

"Australian government officials (will), therefore, not be going to China for those Games. Australian athletes will, though," Morrison told reporters in Sydney.

Morrison said the decision was made due to Australia's struggles to reopen diplomatic channels with China to discuss alleged human rights abuses in Xinjiang and Beijing's moves to slow and block imports of Australian goods.

US diplomatic boycott: What does it mean for the Beijing Winter Olympics?

IOC says it respects US decision on Beijing 2022 Games

Australian government officials have been unable to speak to their counterparts in months, with communication conducted instead through diplomats.

The formal boycott risks further straining Australia's relations with China, its largest trading partner, which soured after Canberra banned Huawei Technologies from its 5G broadband network in 2018 and called for an independent investigation into the origins of COVID-19.

Morrison said any further trade disruptions would be "completely and utterly unacceptable".

The Australian Olympic Committee said the diplomatic boycott would have no impact on the expected 40 Australian athletes expected to compete at the Winter Olympics that begins in February 2022.