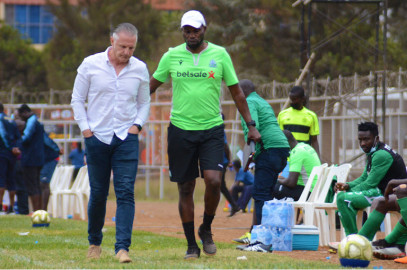 Gor have won their four matches played so far in the Football Kenya Federation League conceding just a goal, and won 1-3 against Al Ahly Merowe of Sudan away to Egypt last month in the CAF Confederation Cup.

Gor Mahia assistant coach Sammy ‘Pamzo’ Omollo says they are enjoying massive competition within the squad and enviable depth, hence their fine run so far in the current season.

Gor have won their four matches played so far in the Football Kenya Federation League conceding just a goal, and won 1-3 against Al Ahly Merowe of Sudan away to Egypt last month in the CAF Confederation Cup.

This is despite enduring a difficult season in the previous campaign, where they lost their Kenyan Premier League title to rivals Tusker, after winning it four seasons in a row.

‘There is high competition for positions which has forced players to go out of their way to be fielded. We have at least two good players for every position, something we did not have last season. This is healthy for us now and in the future,’’ said Pamzo.

The former Kenyan international cites clever recruitment as a key to their significantly improved performance.

‘’Austin Odhiambo, Peter Lwasa and Benson Omalla among other new faces in the squad are doing exceptionally well. You can see Omalla scoring freely and this is a good indication of results to come.’’

Gor Mahia has won their last four league matches conceding only one goal against KCB in their league opener where they won 2-1.

‘’We have talked to our players to completely avoid indiscipline cases that were witnessed last season which contributed to our dismal performance.’’

Gor Mahia next face Ulinzi Stars in a midweek clash on Wednesday November 3 at Thika Stadium.

They currently sit third on the log with 12 points after 4 matches with a match at hand, same as Kakamega Homeboyz.

Bandari are on the driver’s seat with the same number of points but with one match more played.

So far, only Gor Mahia and Kakamega Homeboyz have not lost a match after four outings.