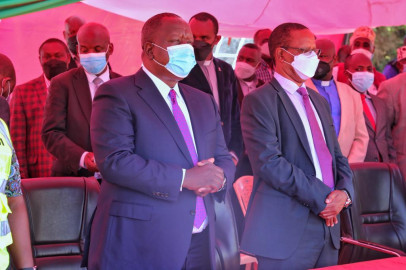 The Government has instructed county commissioners and grassroots administrators to prioritise the security of women aspirants in elections.

Matiang’i said special attention will be given to women aspirants and specifically their protection against any form of intimidation or violence.

He instructed County Commissioners and other National Government Administration Officials (NGAOs) to create a database of all female aspirants and to map out their security needs.

Each administrator will be expected to beef up women candidates’ security needs against violence and harassment as the Government deliberately seeks to boost compliance with the one-third gender rule on elected leaders.

“The maturity of our democracy will be tested on the level of participation of every voter and aspirant in the elections, including women and the vulnerable population,” Dr. Matiang’i said.

The CS who was speaking after commissioning the construction of Limuru Sub-county Police Headquarters.

He was hosted by Limuru MP Peter Mwathi, who is the chair of the National Administration and Security Committee of the National Assembly. Members of Parliament Hon. Edward Kaunya (Teso North), Hon. Mercy Gakuya (Kasarani), Hon. Tecla Tum (Nandi), and Nominated MP Halima Mucheke were among a host of leaders present.