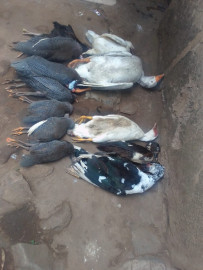 An ornamental farmer in Kakamega County woke up to a shock after losing dozens of his birds to what is alleged to be a poison attack on his poultry.

Mukoya Makhokha who hails from Mumias East Constituency said that he let his birds out early in the morning as he always does - and went about his chores.

Moments later,  he was surprised to see the birds drooling and spitting what looked like foam from their beaks - sending chills through his spine.

It was not long before the birds started dropping dead one after the other. He lost a total of 5 ducks, 6 guinea fowls, and two chickens.

"We called a veterinary officer to come inspect the birds, and he indeed confirmed that they may have been fed poison," he said.

"These birds were innocent, let's learn to resolve our differences in the right way," he said.