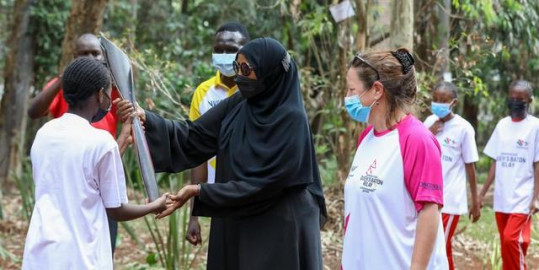 Sports Cabinet Secretary Amina Mohammed Tuesday launched the Queen’s Relay Baton at Arboretum to set the stage for the preparations of the 2022 Commonwealth Games.

The relay, which also spreads the message of sustainability, youth and inclusion, was launched after the arrival of the Baton from Cameroon in Tuesday early morning.

Kenya is the eighth destination the baton is reaching out of the 72 Commonwealth nations and territories it will be visiting as part of its journey to next year's Birmingham Games scheduled for July 28 to August 8.

The launch was attended by the NOCK executive committee led by the president Paul Tergat, athletes and federations officials. As part of the relay in Kenya, the Baton is expected to travel Ngong Hills, Kajiado County Wednesday.

“The Baton Relay carries with it an ideal and topical theme of Sustainability, Youth and Inclusion. It complements our national aspirations, renewed hope and resilience. It directs our collective energies on rebuilding countries and reigniting economies across the Commonwealth that have been greatly affected by global COVID-19 pandemic.

“Everyone who saw the Baton during its journey recognized it as a symbol of the unity and diversity of our Commonwealth of Nations,” the CS said during the launch.

The Athlete Representative NOCK Humphrey Kayange noted that, “It is fantastic to have the Baton arrive in Kenya today. Its arrival signifies an exciting moment in the lead up to the Commonwealth Games in Birmingham, and I’m really looking forward to the various visits and activities during its time here.”

NOCK President, Dr. Paul Tergat noted that the Relay Baton was an opportune time for athletes and sportsmen to be inspired by the values as well as aspire that all sports disciplines are represented at the upcoming Commonwealth Games.