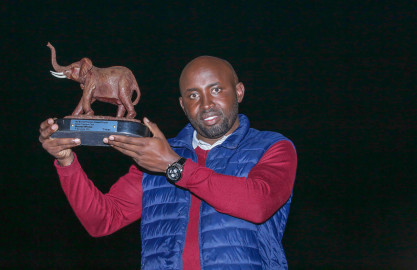 Kericho Golf Club's Tobias Messo carded a round of 45 points at the Karen Country Club to emerge the 2021 NCBA Golf Series champion.

Playing off handicap 30, Tobias carded 21 points on the first nine to combine with 24 points on the second nine for a total of 45 – two points better than his nearest challenger. Tobias, who came into the event on the back of an overall win of the Kericho Golf Club leg of the Series, became the inaugural champion of the Series, which featured 23 golf events played across the calendar.

He fended off the challenge of golfer Winston Kimani - playing off handicap 15 - from Thika Golf Club, who ended the round with a haul of 43 points to claim the men's winner position. He carded 19 points on the first nine to combine with an excellent 24 points on the second nine.  Kimani qualified to play in the grand finale, having finished as men's runner-up at the Thika Golf Club leg of the Series in January.

Claiming men's runner-up spot was another junior, twelve-year-old Nathan Mwangi from Karen Country Club, who finished the day with 42 points to take the final podium place in the category. Nathan qualified to play in the grand finale for his overall win of the Karen leg of the Series – becoming one of three juniors who achieved the feat.

Karen's Akinyi Gitonga claimed the top bragging rights among the ladies, having carded a round of 37 points, one more than Mariah Muthee, who claimed the runner-up spot with 36 points. Akinyi repeated the feat, which won her a qualifying spot into the grand finale at the Karen leg of the Series, where she also emerged lady winner.

Sagar Bhatt and Stephen Okundi were crowned first and second nine winners with 20 and 24 points respectively. In the longest drive contest, Kenya Railway Golf Club's Hillary Kipskosgei claimed the bragging rights among the men while Zipporah Wachira won it for the ladies.

"We have had 22 tournaments so far, and with close to 3,000 golfers taking part, so we could not have asked for more. We have had significant interaction with golfers and the customers everywhere we have been - helping us achieve one of the objectives we set to achieve: helping the brand grow and expanding the Bank's footprint.

"Between the Series and the junior tournament that we have had, we think that we have had immense influence in terms of developing the sport of golf in the country. We are delighted that other corporates are joining in to support the development of golf; we would love to see more companies coming in to give money towards this game and encouraging more players, especially the young ones, to take up the sport.

"As far as we are concerned, the work is not done. This was just the beginning; we shall continue to be very involved in golf, and I can promise that the Golf Series will be back: bigger and better next year. Our view is that this Series must grow into a regional one, and that is our objective going forward."

The NCBA Golf Series was launched in January this year and has since been to over 20 clubs, drawing close to 3,000 golfers and featuring a junior golf tournament where top finishers qualified to play at the 2021 Rome Classic and the Big Five Tournament in South Africa in 2022.

The Grand Finale was the culmination of the seniors' golf events in the calendar, whose participation was drawn from the top five qualifiers at various clubs' events. The Series will conclude with a junior golf tournament that will be held at the Muthaiga Golf Club next week from the 9th to the 10th of December.