Body of woman missing for a week discovered in Baringo, suspect arrested 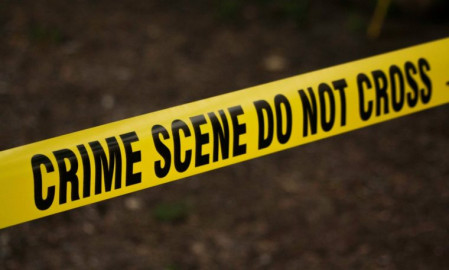 The body of a woman reported missing last week was found buried in a shallow grave in Mogotio, Baringo county, by detectives from the Directorate of Criminal Investigations on Wednesday.

The body had been buried along the banks of the Molo River, off the beaten path. In a "secluded and snake-infested thicket," according to detectives.

Moses Kipchirchir, 34, told police that he murdered the seat-covers vendor at the location where the body was discovered last Friday.

He also told detectives that he went home after strangling his victim to death and returned the next morning with a Jembe in hand, which he used to dig the shallow grave.

“Preliminary investigations conducted by cybercrime and crime scene experts, have placed Ruto at the scene of Kanini’s grievous murder,” the police report explains.

Although details about how the suspect met the deceased are scarce, investigations say Kanini sold seatcovers on a 42-kilometer commute between Mogotio and Nakuru.

Her husband told the police that his wife had called him around 6 p.m. on the day she went missing. She sounded distressed, and asked him to send some Ksh.3,000 urgently.

“As he inquired from her why she needed the money, the keen husband heard a male voice in the background instructing her to speak in Swahili,” the police report says.

“This further exasperated the already worried man, who immediately set off for Mogotio in search of his beloved wife,”

Preliminary investigations say the deceased also called two of her neighbours who sent her an unspecified amount of money.

“Investigations into the whereabouts of the now missing woman were immediately launched and after failing to trace her in Mogotio town that night, the DCIO contacted crime busters from the elite Crime Research andIntelligence Bureau based at DCI headquarters, to help unravel the puzzle. ”the police said.

“A day later on November 13, the main suspect into the murder Moses Kipchirchir Ruto, was busted after detectives stormed his house under the cover of darkness.”

Meanwhile, Kanini’s body has been moved to Nakuru municipal mortuary pending a postmortem.

The Eldama Ravine Law Courts had previously issued custody orders, giving detectives 14 days to complete their investigations into the murder.