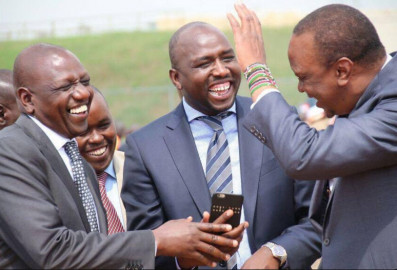 Murkomen, speaking during the burial of Olympian Agnes Tirop, claimed this was a well-calculated move by the Head of State aimed at embarrassing and punishing his deputy William Ruto, whom he is alleged to be at logger-heads with over succession politics.

“I feel very sad that in furtherance of political fights in Jubilee and in the wish to embarrass the Deputy President, the government of Kenya denied the people of Nandi, Uasin Gishu, Marakwet, Rift Valley, athletes and business people their rights in the name of punishing one individual,” he said.

He explained that the Jubilee government had set up plans to accomplish by the end of their second term which would have been beneficial to the Kalenjin people, especially in the field of sports.

Murkomen cited three stadium projects in Kapsabet, Eldoret and Kamariny, as well as the Arror and Kimwarer dams scandal as some of the projects that failed to take off.

The Senator attributed the root cause of all the problems affecting his people to the handshake between President Kenyatta and ODM leader Raila Odinga.

"All the corruption hails from the so-called handshake…since Raila came in. Uhuru should not punish our people so that he goes forth and says that our DP Ruto has not done anything to develop his home region," he said.

The legislator urged the Head of State to build adequate training facilities for athletes from the region as part of his legacy projects.