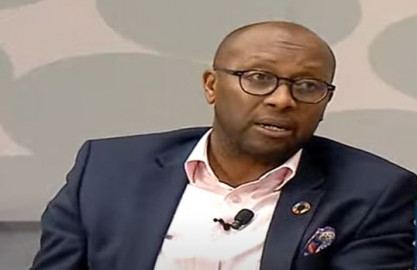 The African Union (AU) should speak up on the travel bans enacted by Western nations on a number of southern African countries following the discovery of the Omicron COVID-19 variant last week, Dr Githinji Gitahi CEO AMREF Health Africa has said.

The variant was first discovered in South Africa and as WHO guidelines state, the Cyril Ramaphosa-led nation reported the new strain to the rest of the world, only to be issued with travel bans.

This happened despite the variant’s exact point of origin having not been determined.

“The only way to stop it is for the Africa Union to take a stand. Africa Centre for Disease has taken a stand but I haven’t heard anything from the African Union which is not acceptable,” Dr. Gitahi said in an interview on JK Live.

“Cyril Ramaphosa has spoken about it and so has President Kenyatta and other African leaders so the AU must also follow suit.”

According to Dr. Gitahi, the selective segregation of the southern African countries is a clear act of racism and the AU should be vocal and raise the issue with the rest of the World immediately in order to find a solution fast.

“It is racism because you have a situation where you have a variant which by WHO standards is supposed to be reported. South Africa reported it but look what happened,” Gitahi said.

“By the time the EU is locking down travel, the virus is all over the world. So why do you select six African countries and say these are the ones we are banning from travelling to our countries but yet your neighbours have the same variant."

Dr. Gitahi continued on to say that Western countries have always had a habit of overlooking African nations and that the trend will continue if the AU does not take action like world failure to which Africa will always be overlooked by the West.

“It happened when we got the vaccines, it happened when we were looking for PPEs, we were left out, We even had problems getting reagents to test for COVID-19. It is discrimination…AU must speak out because if we leave southern Africa alone they will not win this fight,” he said.