Three people killed, another injured after bandits raid a home in Laikipia 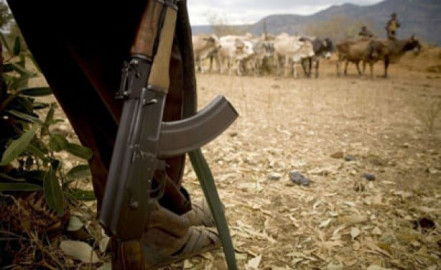 Three people were killed and another wounded after suspected bandits raided a home at Ndindika village in Ngarua, Laikipia County.

The three suspected Pokot bandits staged an attack at the home of Michael Kananu on Sunday at 4pm and reportedly made away with 32 heads of cattle and 2 sheep.

According to the National Police Service (NPS), the bandits drove the stolen cattle towards Laikipia Nature Conservancy where they reportedly found four people fishing at Mbogoini Dam and shot at them.

A multi-agency team however responded and engaged the bandits in an exchange of fire, further recovering all the stolen livestock and returning them to the owner.

The team has since launched a manhunt for the bandits.

“We understand that bandits flushed out of the Operation Zones of Laikipia have sought refuge in settlement areas and continue to engage in acts of criminalities by meting pain and anguish to families,” said NPS in a statement.

“While we regret the loss of lives occasioned by the blood-thirsty criminals, we ask that locals report to police strangers in their neighbourhoods who are likely to have escaped from the Operation Zones.”

The statement further added: “The multi-agency security teams will urgently review their approach to areas that were initially perceived to be of low risks of attacks to ensure that lives and properties are equally protected as those at the high risk areas.”