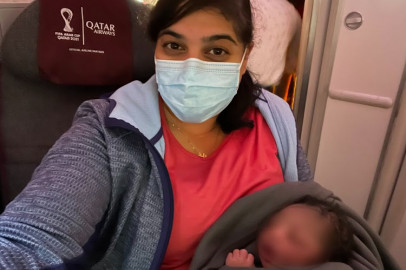 A Canadian doctor successfully delivered a baby midway through her Qatar Airways flight from Doha to Entebbe last month.

The doctor, University of Toronto Professor Aisha Khatib, was called into action when a female passenger, approximately 35 weeks pregnant with her first child, complained to flight attendants of increasing abdominal pains.

The woman, a Ugandan immigrant worker was heading back home to Entebbe from Saudi Arabia. The plane’s pilot, via a PA system, made the announcement when he attempted to determine whether there was a doctor on board to help with the delivery.

Khatib did not hesitate to help the soon-to-be mother despite being worn out from the trip.

"I saw a crowd of people gathered around the patient. At this point I was assuming it was a critical situation, like a heart attack,” Dr. Khatib told BBC News.

"As I got closer I saw the woman lying on the seat with her head toward the aisle and feet towards the window and the baby was coming out!"

As luck would have it, two other medical practitioners, an oncology nurse and a paediatrician, helped Dr. Katib deliver the baby, as they also happened to be onboard the Uganda-bound plane.

"So I was like, 'Congratulations it's a girl.' Then the entire plane started clapping and cheering and was like 'Oh right, I'm on a plane and everybody is watching this.'"

As a sign of appreciation the child’s mother went ahead and named the infant Miracle Aisha, after the doctor who brought her into this world.

"The best part of the story is that she decided to name the baby after me," Dr. Khatib said elatedly.

Dr. Khatib consequently gifted her namesake a golden chain with the name Aisha engraved on it in Arabic as a keepsake.

"I thought I'd give it to her and she'll have a little token of the doctor that delivered her 35,000ft in the air while flying over the Nile," she added.

The incident happened on December 5, 2021 but Dr. Khatib only made it known this week after sharing pictures on social media.