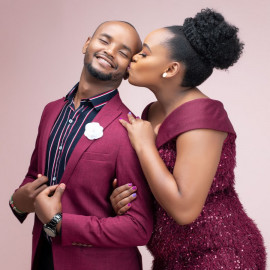 “Good afternoon from the new President of Baby Daddy’s. Let’s address real issues of being a baby daddy or generally co-parenting. What are the challenges both from women and men? Share your stories in my DM.”

Popular YouTuber Kabi WaJesus of the Wa Jesus family has now proclaimed himself  the new president of baby daddies.

Taking to social media, Kabi asked netizens to share via his direct message on Instagram the challenges and stories of being a father or co-parenting while raising their children.

“Good afternoon from the new President of Baby Daddy’s. Let’s address real issues of being a baby daddy or generally co-parenting. What are the challenges both women and men? Share your stories in my DM.”

Speaking to Kalondu Musyimi on Mpasho Live, Kabi’s wife Milly Wa Jesus reacted to her hubby’s new tittle saying she is okay with it.

“It’s about seasons. I think for him, he is in a season where he is taking up a new role, accepting it and getting to know what it is all about. So if he wants to go by that title, then well and good.”

Milly acknowledged that it is not easy getting to know her stepdaughter, adding that they have only met a few times.

“We have met a couple of times. I think it is not as easy because of time restrictions when it comes to seeing her. Also, I personally want Kabi to get to know his child first.”

“The few times I have met with her is only when doing official things like looking for a school, taking her to school and so on. But having fun as a family, we are not yet there. We are however hoping to do it soon,” said Milly.

Addressing claims by netizens that Kabi is just but a social media father not taking up child responsibilities, Milly ran to his defence saying, “Since the DNA results were released, Kabi was certain that he is the father to Abby and took up his roles very well. He has been doing great and I am proud of him.

Milly went on to urge fathers who have not been in their children’s lives for a larger part of it, not to feel condemned if an opportunity presents itself to be present.

“I am here to support Kabi. He is calling out any father who has not been in their child’s life to also follow his suit. Even if you have not been present for all that time, don’t feel condemned as long as long as there is that opportunity, you can still go in and do something.”

The digital influencer further added that she has accepted the situation and Kabi's other child as her own.

“I accepted the situation long ago. It has not been easy. There is so much going on behind the scenes that we may not be able to share. But I now love the child like she is my own. As long as she has my husband’s blood, she is also mine.”