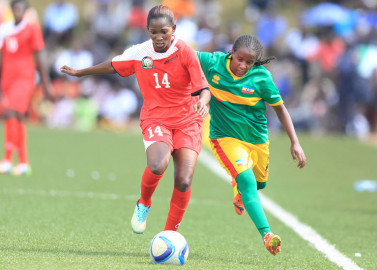 Kenya is made a remarkable statement in their bid to qualify for the continental showpiece following a 15-1 aggregate win over South Sudan last week, thrashing them 7-1 in the second-leg tie of at the Nyayo Stadium.

Speaking to Citizen Digital, Kanyi hailed the team but urged the federation to organise friendly matches with tough teams which can expose the team’s weaknesses before the next qualifier.

“It’s a good thing winning with a big margin. South Sudan were not that tough as compared to West and North African teams, so FKF should organise friendly matches with big teams to prepare Starlets to the next rounds of qualifiers.

“They are supposed to meet either Uganda or Ethiopia in their next round but on that I don’t see any big challenge because we have played both teams and defeated them before. However, that does not mean it will be a walk in the park,” said Kanyi.

Kanyi also called upon Starlets head coach Charles Okere to consider experienced top players in the team, who have been overlooked in the recent assignments.

“The qualification is getting tougher in each stage and that’s why I feel the head coach should introduce other players who ply their trade in Europe. Players like Esse Akida (PAOK Greece), Cynthia Shilwatso (EdF Logrono B, Spain) and Mary Kinuthia (ID Dalhem, Sweden) should be called up but again that depends with the coach himself.

“The earlier he does that the better to ensure they are well integrated in the team,” Kanyi explained.

Kinuthia and Akida have not been called up in the team for over two years, despite their scintillating performance in the clubs they have played for in during that span.

Kanyi, took over from David Ouma in July 2017, and had a remarkable run with the team, with his last assignment being a 3-0 victory over Zambia in an international friendly in March 2018.

Starlets made their debut at the continental showpiece in 2016 but narrowly missed out in 2018 after going out at the hands of Equatorial Guinea.

Last year’s showpiece was cancelled at the advent of the COVID-19 pandemic, and this year’s edition will be used as FIFA World Cup qualifier with six best teams sealing their slots in the New Zealand/Australia fiesta set for 2023.